The St. Patrick’s Day celebration in Savannah goes well beyond St. Patrick’s Day. It is a month long celebration with the second largest parade in the country, festivals, and Irish celebrations. Not only does the parade include Celtic societies and Irish families, it also features pipe bands and Irish dancers from all over the East Coast. The festival is full of live music, fun activities, great food and green beer…yes, green beer. With the parade featuring 350 marching units and 15,000 people, it can get pretty long. You can purchase bleacher seating from a local tour company if you wish. The festival is where you will find the green beer and if you wish to walk around the festival with this beer, you must purchase a wristband. The festival will also include live entertainment, activities to partake in, interactive artists, photo booths, and food and beverage areas. The city also offers a St. Practice Day Charity Bar Crawl. For a fee, you will get a Pot O’ Gold with a Leprechaun List scorecard map to mark your progress and get you into all the participating bars for free. Those looking for some friendly competition can compete with other “crawlers” by visiting each bar to complete their Leprechaun’s List. As you enter the different venues, a doorman or bartender will mark off their bar on the scorecard, just for showing up – you don’t even have to buy a drink.

If you are looking for something free, non-alcoholic, and family friendly, Tara Feis is a great option. Tara Feis is an Irish festival that always takes place the Saturday before the parade. In addition to the live entertainment (they have a main stage and a children’s stage for the kids!), arts and crafts, and food, the festival also includes Irish storytellers, Irish dance performances, and Pipe and drum bands. And of course you can’t miss the Greening of the Fountain at Forsyth Park. It is a tradition in Savannah to dye all the fountains green and it all starts with the one at Forsyth Park.

Every year, St. Louis brings in this green holiday with parades, runs, and festivities. The city starts things off early with a five mile run.  Once you cross the finish line, you can head downtown for their first parade of the holiday. Their St. Patrick’s Day parade is no ordinary parade. It is full of elaborate floats, marching bands and larger-than-life helium balloons that you can only see in St. Louis. In addition to the parade, downtown you will also find Leprechaun Village an Irish-themed entertainment area for children of all ages and Shamrock Village an Irish-themed entertainment area that features food, Irish Whiskey, various alcohol and non alcohol beverages, and live entertainment. Then, on St. Patrick’s Day, St. Louis’ second Irish parade kicks off. The Ancient Order of Hibernians hosts its own traditional parade featuring family clans, marching bands, floats and Irish music and dance. 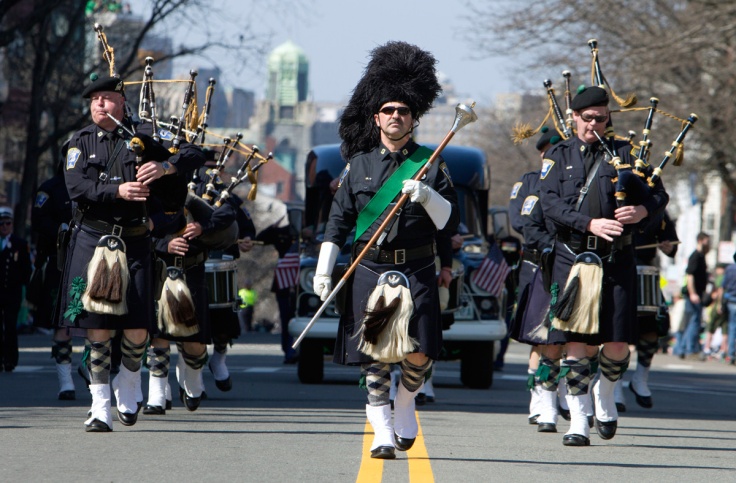 With claims of having the largest concentration of Irish-Americans, Boston is known for being a proud Irish City. In fact, they had the very first St. Patrick’s Day parade way back in 1737. First off, South Boston hosts the third largest St. Patrick’s Day Parade in the nation. In addition to the parade, every year Boston features an Irish Film Festival where every film represents Ireland. You can purchase an all access pass to all the screenings and all the receptions for the festival. They also offer a six day concert series featuring a local Irish band. If you want more music, Boston offers a St. Patrick’s Day Celtic Sojourn with Brian O’Donovan for all the Celtic music lovers out there who want to celebrate the holiday in true Irish style. For something different, if you are into Irish heritage, the Boston Irish Tourism Association provides guided walks of the Irish Heritage Trail; over 200 years of Irish history in Boston from Commodore John Barry to President John F. Kennedy.